In 1863, Richard F. Burton (already in his consulate at Fernando Po) set out for Dahome on an official government mission to beg the native negro king there to stop his (the king's) part in the slave trade! (also cannibalism, mass ritual murder of military captives, and other such practices we don't hear too much about).  Britain, at that time, had already long since passed laws against slavery.  How often, in the establishment media, do you hear of that one?  In 1966 a "re-print" came out, but it seems there was lots of material left out.  In the "Ministry of Truth" (Orwell's "Minitru"), the scissors got snipping, and out went large portions of Burton's work.  It just so happens, by sheer coincidence of course, that almost everything expurgated showed blacks in a very poor light!  The original writer was actually there in the 1860s; the 1960s "editor" was not.  Who do you believe?

Pro-Zionist and pro-NWO agents have been fielded into academia for many decades.  The material resurrected on this page was suppressed from the 1966 US [New York: Frederick A. Praeger] or UK [London: Routledge and Kegan Paul] “edited” re-issues (editor: C. W. Newbury).  See Introduction, section "The Treatment of the Text" in those editions, for the usual apologetic of the "court historian" for the System he serves.  It is evident that most of the material was suppressed simply because it was the reported testimony of men who saw, with their own eyes, the activities of blacks in their natural habitat, which often included ritual murder, cannibalism and torture.  This material might be expected to have a high persuasive value in countermanding the prevailing left-wing socio-political agenda, and so was omitted.  Due to the omissions, even the original subtitle was deleted.

Just to give a taste for what Newbury had in mind, we read from the Introduction (p. 37): "A chapter in the middle of this volume [II] has also been omitted: it contains Burton's eulogy of the views of James Hunt (founder of the Anthropological Society) on 'The Negro's Place in Nature'; and though it tells us much about Burton's prejudices concerning Africans [notice how negroes have suddenly become “Africans” -- JR], it is irrelevant to his description of Dahomey."  But the erudite Newbury neglects to offer any evidence that Burton's "prejudices" were not entirely well-founded.  It would seem proper enough to consider "people" who would slaughter over 100 of their own kind in cold blood just to obtain heads to decorate the king's hut for a special ceremony (the Customs of 1785) as something less than human, would it not?  Burton says this was not due to the degeneracy of the king, but because his people demanded it.  It’s also rather insulting to the original author to state that a chapter that he chose to include in his work is “irrelevant”!  But arrogance has no bounds to the correctors of our opinions and the transmuters of our past.  Burton knew full well that this data was certainly as relevant as telling us, for instance, what color umbrella was held over the king's head or what kind of insects and nuts the negroes ate, and properly included them in his two-volume set.  He obviously was of the opinion that the racial views of Hunt were consistent with what he had observed first-hand in Dahomey.  Newbury sagely informs us (p. 38) that "The major question posed by the [Victorian] age was whether Africa could be considered as part of the human race", then neglects to tell us (and specifically deletes) what they found out.  Now you can know.

At least Newbury had the honesty to mention what he had taken out; others of his ilk have been known to not even bother.  Also, Newbury did not take out every single derogatory reference to blacks, and he included a few uncomplimentary illustrations taken from other sources.  However, he did take out the most revealing of Burton's original content, that being chiefly Chapter XIX and Appendix III.

Editor Newbury's intellectual tampering extended to the most trifling of things. For instance, in the chapter entitled "Of the Dahoman Religion", he censored (on p. 304) a one-line note Burton had made referring to the Jews' tribal "law" covering when a bride is found to not be a virgin! [1864 ed., Vol. II, p. 162: "The Jews were more ferocious (Deut. xxii. 21)", referring to their practice of stoning].  See the following link for facsimile scans proving this cute Orwellian deletion [ HERE ].  Other examples [ HERE ].  Newbury had a tinge of conscience, however, as shenanigans like this were covered by his stating, again from the Introduction, “The copious footnotes to the text have been retained, except where in a few instances, Burton’s prolixity, pedantry, or whimsy have led him far away from the subject.”  Oh my!  Well, now we know what he meant by "prolixity, pedantry, or whimsy".

Another interesting observation one may draw from this is that censoring in deference to blacks and to Jews seem to go hand in hand.

This material is offered in defiance of the "politically correct" cleansing of this important historical work.  The missing portions, restored herein, certainly don't make blacks "look good".  They constitute a record of institutionalized warfare, savagery and slaughter of the most base variety.  So much for the happy, noble savages existing in harmony with Nature until the White devils spoiled their day.

Appendices I and II would indeed seem to be trivial after the passing of so many years, but it appears that these were also deleted since they lent further legitimacy to Burton’s work by emphasizing what a meticulous noter of detail he was.  Expurgation often works in subtle ways.

So, if you get a copy of the reprint (about $75 used), and supplement it with this free material, you will in effect have the whole original work, and be able to learn much more about negroes and slavery than you ever will from TV's "Roots".  In any case, the files herein are very informative by themselves.  The original 1864 editions of Gelele are considered rare and go for $1,200 to $1,800, by the way.  The 1893 memorial edition had the same text as the 1st ed. and is less rare and costly.

My "niggers" are, as Krumen should be, employed all the day long in clearing, cutting, and planting--it is quite the counterpart of a landowner's existence in the Southern States. Nothing will prevent them calling themselves my "children," that is to say, my slaves; and indeed no white man who has lived long in the outer tropics can prevent feeling that he is pro tempore the lord, the master, and the proprietor of the black humanity placed under him. It is true the fellows have no overseer, consequently there is no whip; punishment resolves itself into retrenching rum and tobacco; moreover, they come and go as they please. But if a little "moral influence" were not applied to their lives, they would be dozing or quarrelling all day in their quarters, and twanging a native guitar half the night, much to their own discomfort and more to their owner's. Consequently I keep them to their work.

The African, like the Jew to whom you have paid only twice too much, is miserable if he fancies that you escape from him with a farthing.

The palm oil of Dahome is of excellent quality, and a Mohammed Ali would soon make the land too rich for slave-exporting.  But these are negroes.

By the state law of Dahome, as at Benin, all men are slaves to the King, and most women are his wives.  The blood-royal is the only freedom in the country, and it probably does not exceed two thousand souls.

[The negro] never thinks of claiming equality with the Aryan race, except when taught. 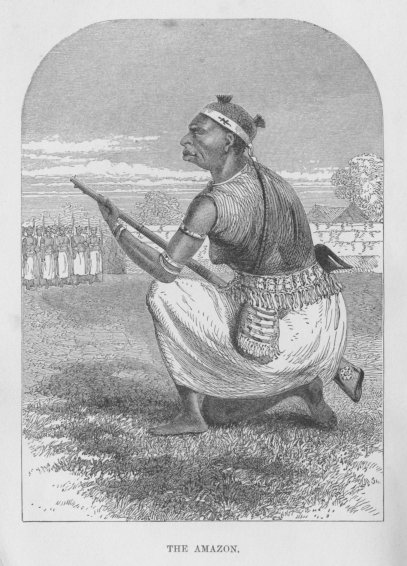 Original frontispiece illustration from Vol. I

Isabel Burton preface to the Memorial edition -- Lady Burton's preface says a lot in only 400 words about Africa and slavery.  If you read no other files on this page, read this one.

Preface -- Original Burton preface and intro material.  Here he makes very clear the purpose of the mission to Dahomey.  To be fair, parts of this ended up in the re-print, e.g., the original instruction letter from Russell detailing the government's intentions.

"I Do Not Become 'Fast Friends' with Lagos". 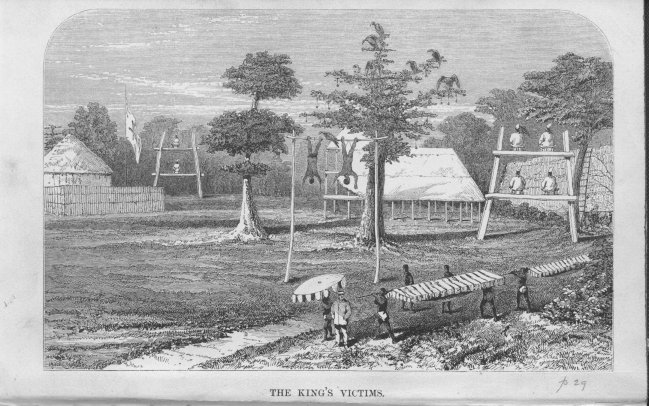 Chapter XIX --  "Of 'The Negro's Place in Nature'".  Burton writes of "the gorilla of the morrow" and the "kneeling negro who, properly speaking, should have been on all-fours."  To this day, no one has ever proven Burton or Hunt wrong on the question of the negro.  Only feminized, emotional arguments and sophistries are used, never hard, cold, objective fact.

I. and II.  "ITINERARY FROM WHYDAH TO AGBOME" and

IV.  "CATALOGUE OF THE DAHOMAN KINGS".

[Minor technical note for Burton aficionados:  Both original editions were issued in the same year: 1864.  The 2nd ed. corrected either a printing error or a late addition which had put Jules Gerard's letter at the very end of Vol. II, after App. IV.  The letter was moved to the end of App. III, the more appropriate place.  Thus, the Gerard letter moved, but not the appendices.  The textual contents of both editions are the same, except for a very minor footnote addition in the 2nd ed (Vol. I, p. 122 on Mark Lemon:  "A negro, and not connected with the English press.").  There was also a "memorial edition" issued in 1893, like the 1st ed. but with a short added preface by Lady Isabel Burton.  A facsimile of this edition was available from Elibron Classics, but this is now out of print and the Elibron website is dead!] 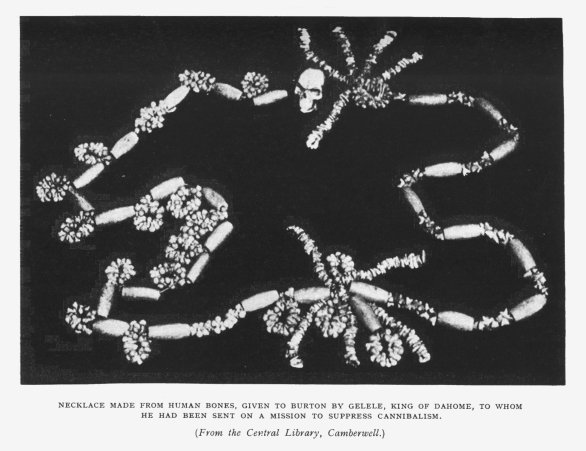 No Nuremberg-style "cannibal" trials for them.

And just for the heck of it:

(Maybe this one became "the world's fastest woman"!)

From the Ulster County Gazette, Jan. 4, 1800, published in Kingston, NY USA
by Samuel Freer and Son