Comparison of Burton's "The Sioux or Dakotahs" with Twain's "The Noble Red Man".

"The qualities of the Sioux, and of the Prairie tribes generally, are little prized by those who have seen much of them. They ignore the very existence of gratitude; the benefits of years can not win their affections.  After boarding and lodging with a white for any length of time, they will steal his clothes; and, after receiving any number of gifts, they will haggle for the value of the merest trifle. They are inveterate thieves and beggars; the Western settlers often pretend not to understand their tongue for fear of exposing themselves to perpetual pilfering and persecution; and even the squaws, who live with the pale faces, annoy their husbands by daily applications for beads and other coveted objects; they are cruel to one another as children."

"Their punishments are Draconic; for all things death, either by shooting or burning. Their religion is a low form of fetichism. They place their women in the most degraded position. The squaw is a mere slave, living a life of utter drudgery . . ."

"The warrior, considering the chase an ample share of the labor-curse, is so lazy that he will not rise to saddle or unsaddle his pony; he will sit down and ask a white man to fetch him water, and only laugh if reproved."

"Impulsive as the African, his mind is blown about by storms of unaccountable contradictions.  Many a white has suddenly seen the scalping-knife restored to its sheath instead of being buried in his flesh, while others have been as unexpectedly assaulted and slain by those from whom they expected kindness and hospitality."

"Of their bravery Indian fighters do not speak highly: they are notoriously deficient in the civilized quality called moral courage, and, though a brave will fight single-handed stoutly enough they rarely stand up long in action.  They are great at surprises, ambuscades, and night attacks: as with the Arabs and Africans, their favorite hour for onslaught is that before dawn, when the enemy is most easily terrified - they know that there is nothing which tries man's nerve so much as an unexpected night attack - and when the cattle can be driven off to advantage."

Now on to Twain [Emphasis added in red bold italic]:

"He is ignoble -- base and treacherous, and hateful in every way. Not even imminent death can startle him into a spasm of virtue. The ruling trait of all savages is a greedy and consuming selfishness, and in our Noble Red Man it is found in its amplest development. His heart is a cesspool of falsehood, of treachery, and of low and devilish instincts. With him, gratitude is an unknown emotion; and when one does him a kindness, it is safest to keep the face toward him, lest the reward be an arrow in the back. To accept of a favor from him is to assume a debt which you can never repay to his satisfaction, though you bankrupt yourself trying. To give him a dinner when he is starving, is to precipitate the whole hungry tribe upon your hospitality, for he will go straight and fetch them, men, women, children, and dogs, and these they will huddle patiently around your door, or flatten their noses against your window, day after day, gazing beseechingly upon every mouthful you take, and unconsciously swallowing when you swallow! The scum of the earth!"

"The Noble Red Man seldom goes prating loving foolishness to a splendidly caparisoned blushing maid at twilight. No; he trades a crippled horse, or a damaged musket, or a dog, or a gallon of grasshoppers, and an inefficient old mother for her, and makes her work like an abject slave all the rest of her life to compensate him for the outlay. He never works himself."

"All history and honest observation will show that the Red Man is a skulking coward and a windy braggart, who strikes without warning -- usually from an ambush or under cover of night, and nearly always bringing a force of about five or six to one against his enemy; kills helpless women and little children, and massacres the men in their beds; and then brags about it as long as he lives, and his son and his grandson and great-grandson after him glorify it among the 'heroic deeds of their ancestors.'"

http://www.ihr.org/jhr/v17/v17n3p12_Twain.html   This link goes nowhere, but the ihr.org search engine insists this is the current link!
http://www.amren.com/archives/back-issues/december-1991/#article1
This page includes "Noble Savagery", Jared Taylor's excellent review of Clifton's The Invented Indian, just below the article linked above.  A clarion call against anti-White ethnic flummery!

A facsimile of a page from Virginia: A Centennial Story by William H. G. Kingston (Boston: D. Lothrop Co., 1876). 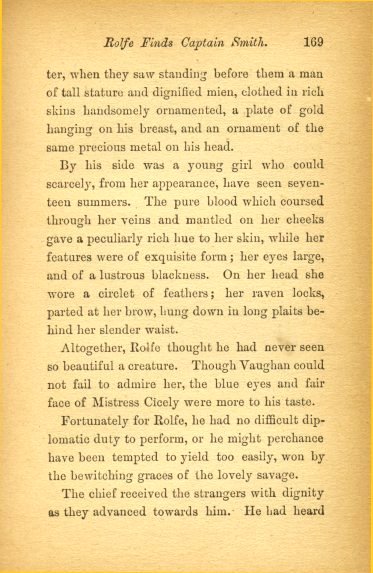 Read down to mid-page, and you'll see an example of what Twain was talking about, altho' this text post-dates Twain's essay by 6 years.  It's so close, it is surely indicative of that sort of flowery 19th-C writing.  How about that term "pure blood": allowed to Indians, but denied Whites?  Note however that Kingston was referring to Pocahontas and her father the chief, especially impressive ones, not to Indians in general.  For several full chapters, see Virginia: A Centennial Story.

Comment:  Looks like two Whites, from totally different backgrounds, had an amazingly close correspondence of opinion about the nature of  "Indians".  This information is denied to the young of today.  The Burton book is practically unheard of, and is usually spoken of only in the context of Mormonism; the Twain essay is omitted from most anthologies.  Twain's essay on Jews suffered a similar fate, just like Burton's book The Jew -- expurgation and burial.

Actually, the Twain text "The Noble Red Man" ends with the following informative passage (emphasis as in the original):

"By Dr. Keim's excellent book it appears that from June, 1868, to October, 1869, the Indians massacred nearly 200 white persons and ravished over forty women captured in peaceful outlying settlements along the border, or belonging to emigrant trains traversing the settled routes of travel. Children were burned alive in the presence of their parents. Wives were ravished before their husbands' eyes. Husbands were mutilated, tortured, and scalped, and their wives compelled to look on. These facts and figures are official, and they exhibit the misunderstood Son of the Forest in his true character--as a creature devoid of brave or generous qualities, but cruel, treacherous, and brutal. During the Pi-Ute war the Indians often dug the sinews out of the backs of white men before they were dead. (The sinews are used for bow-strings.) But their favorite mutilations cannot be put into print. Yet it is this same Noble Red Man who is always greeted with a wail of humanitarian sympathy from the Atlantic seaboard whenever he gets into trouble; the maids and matrons throw up their hands in horror at the bloody vengeance wreaked upon him, and the newspapers clamor for a court of inquiry to examine into the conduct of the inhuman officer who inflicted the little pleasantry upon the "poor abused Indian." (They always look at the matter from the abused-Indian point of view, never from that of the bereaved white widow and orphan.) But it is a great and unspeakable comfort to know that, let them be as prompt about it as they may, the inquiry has always got to come after the good officer has administered his little admonition."

The IHR and AmRen versions also took out a few lines here and there in the main part of the essay.

== The complete, fully restored text in HTML is now HERE.

== FACSIMILE PDF OF THE TWAIN ESSAY, "THE NOBLE RED MAN".

Excerpt from Three Years Among the Comanches by Nelson Lee is offered here for comparison.  Lee lived among the Indians for three years as a slave and medicine man, so he was in a position to know what he was talking about.  Hundreds of testimonials like this, which more or less say the same things, could be cited.

Oh well, so much for "Dances with Wolves"!

It was a good hallucination while it lasted, Hollywood.