The City of the Saints

and Across the Rocky Mountains to California

Published in 1861 (London: Longman, Green, Longman, and Roberts) and in 1862 (New York: Harper & Bros.).  Occasionally reprinted by small publishers as a tourist's travelogue or college textbook; generally ignored.  The book is voluminous (xii + 574 pp.); only chapter II and the preface are reproduced here.  The rest deals with Mormons, Salt Lake City and the topography of the American West.  Burton had met with none other than Brigham Young himself.

Chap. II -- "The Sioux or Dakotahs".  In full text.  A rather uncomplimentary view from a dispassionate observer.

Preface to the book.  In full text.

Original illustration included with the above.  What the plains Indians actually looked like after years of vagrancy and parasitism: 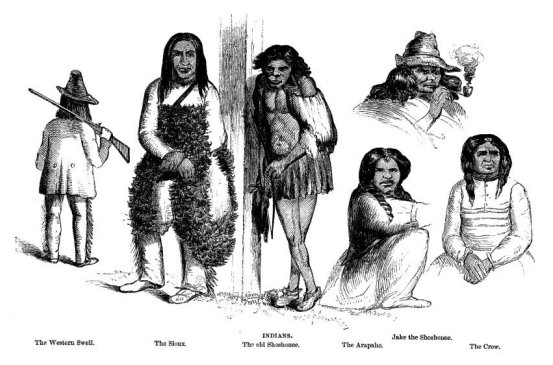 My Comparison of Burton's "The Sioux or Dakotahs" with Twain's "The Noble Red Man".
Includes links to the abridged Twain essay, the complete Twain essay, and facsimiles.

Related link:  Dickens on 'The Noble Savage', thanks to the Heretical Press.

"Native American spirituality" is mostly nonsense.  It consists of Whites overlaying their own values on top of whatever little the Indian had, then pretending not to notice the obvious contradictions.  Early chronicles say that the Indians' chief deity was the so-called "Great Spirit", but even this vaunted "Great Spirit" may, depending on the tribe, just be a garbling of the Christian God as part of early conversion attempts on the part of the old Padres.  [NOTE: The only consistently identifiable "native" god is the Manitou, a crude and simple shamanistic being.  "Great Father" or "Giver of Life" may have been truly aboriginal; "Great Spirit" was sometimes an accurate translation, supposedly.  The point is that we'll probably never know how much "deep meaning"  really originated with the Indians, versus how much was imported to them by enthusiastic Whites out to prove "all God's chillins be equal"].  The "Earth Mother" is an utter canard -- there is nothing to it (see Clifton's The Invented Indian).

We see this pattern all the time:  A more advanced, superior culture settles a totally wild area, bringing the small numbers of natives present vast benefits.  The natives are, in general, total savages without the slightest hint of redeeming human social qualities.  More natives are brought in by capitalists, out for cheap labor and a buck.  Reproduction kicks in.  The savages out-breed the "invaders" (while the great-grandsons of the settlers get fat, lazy and narcissistic and eagerly gobble up tales about how evil their ancestors were).  These swarms get their first taste of ethnic nationalism by osmosis from the superior culture, without whom they could have achieved absolutely nothing, and become perpetually dissatisfied, eventually insatiable.  The natives rise up, kick out the "invaders", then claim all of the country as always having been their own, even though there were very few of their kind there originally, and the few that were there did nothing but squat on the land and chop each other up.

Sound familiar?  Try Haiti, South Africa, Bohemia/Moravia, the Sudetenland, Polan (now Polen, or "Poland"), which means simply "nearby farmland" in medieval German, the U.S.A. (getting there!), . . . etc. etc. ad nauseum infinitum.  But the poor befuddled masses with their fantasies about "cultures" which never existed occasionally get to hold guns, you see.

"The history of the settlement of an area is determinative for all time.  Culture is not created by force or by lies, but only by intellectual work on the part of the elite of a people.  Rights and ownership arise only by reason of the achievements of a people brought into fullness in a geographical area.  There is no culture of weapons, no culture of lies.  Only history provides an insight into the identity of the real founders of an ethnic culture."

-- Else Loeser, "The Image of the Germans in Polish Literature".

The Americans' "noble savage" bilge, inherited from Rousseau, has caused inestimable damage, much like the Brits' "White Man's burden" which ultimately destroyed their empire.  Mix this with Marxist anarchy as the "ideal natural state" (Rousseau again!) and Ayn Rand "objectivism" and you have a powerful civilization-destroying stew.  This destruction, more than 200 years in the making, is now approaching its terminal stages.

Earlier forms of "colonialism" or "imperialism" didn't work because the desire to conquer was not backed up by a strong White racial ethic.  It was self-defeated by Christianity, the death-wish religion.  The only solution:  White Men must again teach their own kind the old martial virtues, combined with an absolute belief in the basic good and sanctity of the Race.  Self-destructive "revealed" religions must get the boot.

"I do not believe that an Indian of the plains ever became a Christian. He must first be humanized, then civilized, and lastly Christianized; and, as has been said before, I doubt his surviving the operation."

-- Sir Richard F. Burton, The City of the Saints