This book has a large amount of information about Jews in medieval Spain.  It repudiates the works of Lea and Loeb, who seem to have established much about what people today think they know about Spanish Jews and the Inquisition.  Originally published in 1930/1 (New York: Robert M. McBride Co., xix + 515 pp.; London: Sheed & Ward, 644 pp.).  Later editions (e.g., New York: Tudor Publishing Co., 2nd ed., 1938 under the title Isabella of Spain – The Last Crusader) re-wrote some passages to be a touch milder, and deleted some nasty terms like "Ritual Murder" and "Jewish Conspiracy" from the titles, but the raw info remained in all its pungency.  All text was scanned from the 1st edition text.

SEE LINK TO THE WALSH/ROTH ACADEMIC BRAWL FARTHER DOWN.

"Look at the effigies on some of those orange-tinted marble tombs in Spain. They are not the faces of yellow Tartars or brown Bushmen or black voodoo doctors. They are the faces of our own western European stock, some of them fine, noble and sensitive; such faces as you might meet in Italy, in France, in Germany, in Poland, in Great Britain or Ireland; among professional men or business men in London or New York clubs."

"It is interesting to note how men under stress of circumstances shift gradually from one point of view to another, believing all the while that they are consistent."

Refreshing, to see how (many) old history books used to be written.  This is one excellent example.  These are all the chapters or parts thereof which deal in a substantive way with the subject of Jews: 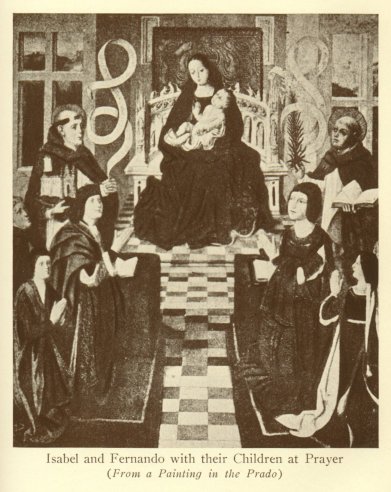 Commentary by Dr. Cecil Roth and reply by William Thomas Walsh regarding this book.

See the sparks fly!  Walsh thoroughly trounces him, too!

From The Dublin Review, October 1932:

NOTE:  This valuable material was originally posted on "St. Anthony of the Desert's Catholic Website", but this site is now defunct [last known URL:  http://frontpage.inficad.com/~hermitage/judaism.htm#Walsh].  I have restored the files here using an archival laserprint.

>  TEXT AND GRAPHIC OF THE ALHAMBRA DECREE, EXPELLING THE JEWS FROM SPAIN, 1492.  The text differs in semantic details from Walsh's partial translation, but the gist of it is the same.

>  "Response to the Edict of Expulsion by Isaac Abravanel".  Evicting them from Spain was a very good idea indeed, judging from the Jews' hateful and vindictive response illustrated by this quasi-historical text.  The unfortunate thing is that Jews who feigned baptism and conversion to Christianity were not considered by the Spanish state to be legally bona fide "Jews", and were allowed to stay (thus the edict was especially mild and forgiving, regardless of what the Jews had to say about it).  It's hard to imagine the Spanish being that naive, but they had bought into the Christian myth of "belief over race", and it destroyed them, as it will destroy anyone who subscribes to such beliefs.

This text appeared in the historical novel The Alhambra Decree (N. Hollywood, CA: Carmi House Press, 1988) by David Raphael, pp. 153-6.  Before thinking that it therefore can have no historical legitimacy, we must consider that it is possible for a real historical item to appear in a work of fiction.  Also, historical fiction can accurately reflect long-term historical attitudes, especially when one considers who is writing it.  For instance, consider Moll Flanders' portrayal of White slavery and predatory mercantile capitalism; also, Charles Dickens' novels, etc.  The ad blurb for this book states that it is "based upon original medieval Hebrew and Spanish documents, many of them eye-witness accounts", and the author's note (pp. 354-6) says "to a large degree, this novel is based upon historical fact and historical figures.  Many of the accounts provided by the medieval chroniclers of the era, both Jewish and Christian, have been integrated into the body of the work."  He continues:

On the life and thought of Don Isaac Abravanel, I have relied upon the excellent work by B. [Benzion] Netanyahu.  At the time of the expulsion, Abravanel was regarded as the unofficial spiritual head of Spanish Jewry.  He writes, "I was the head of all my people in Spain.  They eagerly listed [sic] to what I would say and faithfully followed my instructions." (Quoted from the introduction to Passover Sacrifice by B. Netanyahu.)  [Medieval chronicler Elijayu] Capsali describes him thus:  "At that time there came before the King and Queen a scholar comparable to Daniel, Don Isaac Abravanel, who entreated the King and Queen to dispense with the evil deed and to revoke the decree.  But they did not listen nor pay heed to him.  On that day, permission was given to Don Isaac Abravanel to speak all that was in his heart on behalf of and in defense of his people.  There he stood like a lion with wisdom and with strength and with awesome power of speech, for he had a golden tongue whose worth was fifty times fifty shekels.  There was no one like him in the land, a man who spoke with clarity in Hebrew and in other languages."

So, that Capsali quote may have been the entire basis for the "Response", or Capsali's full text may have had more, or other works may have been consulted.  Supposedly, Abravanel himself had written a "succinct" account of the encounter, which was then amplified by Capsali; Capsali claimed that Abravanel had written Isabel a snooty letter (see The Jews of Spain by Jane S. Gerber, p. 134); thus, such a thing could exist in the state archives.  In any case, the "Response" has value in illustrating Jewish attitude and temperament, whether from Abravanel, Capsali, or Raphael, and is entirely consistent with such Jewish opinions as expressed in a myriad of places over the ages.

I'm afraid that the abridged version of the Decree, also currently making the rounds in e-mails and message boards, appears to originate with the Raphael book as well (pp. 148-152).  Like the "Response", it is written interspersed with fictional dialog amongst the principles involved.  Luckily, as a condensation it's quite accurate.

I welcome further inputs/opinions on this (see my top page for e-mail).

>  For comparison, check out the English Edict of Expulsion of 1290.  [ext. link]  Men and women of good will who actually cared about their countries' futures have always felt the same way about Jews.

>  Here a Jewish group complains that the Spanish dare to promote their own saints their own way.  Jewish duplicity and arrogance truly knows no bounds.  It's really amazing.  FORWARD ARTICLE ARCHIVE.

>  . . . and here they demand the "right of return" to Spain, a right they interestingly do not grant to the "600,000 Arabs" (by Zionist admission) of Palestine in accordance with the "universal rights of humanity" they promulgate for the "United Nations".  Things are always different when they apply to you and not somebody else.

Their psychology will seem familiar to anyone who recalls the vagaries of mob psychology during the World War. In Boston the love-letters of a German orchestra-conductor were made public because he was suspected, and unjustly, of being a spy. An inflamed public imagination in Connecticut became almost hysterical when the senile governor announced in a speech that Germans were secretly drilling and collecting arms in that state. An inoffensive German musician near Hartford had a concrete foundation built for a new chicken-coop; ah! a gun-base from which the Germans would shell the capitol! A wagon­load of wire arrived for his chicken-yard; anyone could see that he was installing a wireless, to send military information to Berlin, and cause the death of American soldiers! It was a wonder the poor fellow was not hanged by the mob -- there were many willing to assist, but fortunately they lacked leaders. The man's business, however, was ruined; he was arrested on a technicality, and kept in jail some months until his innocence was completely proved; meanwhile his wife and four children were left destitute.

This reminds one also of the German colonial officials that had all assets seized, and then were sent home penniless after the war.  Part of the joys of "democracy" and "human rights". 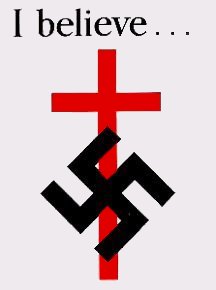 (Some of you out there might see the irony in this graphic.  I've taken a piece of standard allied war propaganda and inverted it -- originally the red cross was in front of the black swastika.)